Well, it’s been quite a feat to get to this stage, but I am delighted to announce that the Kickstarter pre-launch page is now live. This means that you can register and be notified when the project launches in April.

I thought it would be worthwhile explaining how I foresee the crowdfunding campaign running. In my previous blog posts, I explained the reasons for choosing this funding route as it will enable me to set up production for 100 units.

The Kickstarter campaign will have a funding goal (published in due course). This is the total amount of money required to set up an initial production run. People who back the project, known as ‘Backers’, commit to funding the project in return to be one of the first to receive the product. The amount that each Backer will have to pay for the product will be revealed when the campaign launches (I have yet to finalise these costs). There will be an additional postage charge, depending on where you live in the world, and this will be made clear. To give you an idea, items will be dispatched from the UK so expect the postage charges to increase the further away you get.

As this is only an initial production run of 100 units, there will be a limed number available in each geographical region worldwide. So why have I decided to do this? One of the greatest joys I have had during the pandemic (if there can be any) is live streaming the incredible journey of birds nesting and bringing new life into the world. These live streams on my social media channels provided millions of people with so much happiness and joy at such difficult times. Being based in the UK, one of the limiting factors is that breeding only happens once a year around April/May. This means that I can only provide live content for this brief period. My ambition is to have more nest boxes located around the world to provide live streams all year round

As well as being part of this exclusive club of nest watchers, you will be able to view other nest cameras on the Nest Box Live network via the app. This is going to truly revolutionise how we watch birds nesting and I can’t wait for you to become part of it.

In the meantime, make sure that you follow this link to the Kickstarter pre-launch page and click “Notify me on launch”.

In my next blog post, I hope to being you more details about the pricing structure.

As part of Kickstarter’s strict approval process, I was required to submit a full demonstration video showing the app and nest box working together. I am delighted to be sharing this with you today.

Whilst it’s not a big production video with moving camera shots and fading lights, it does show the technology working in its entirety. I think it’s important to remember that I am working on this project single-handedly and don’t have the resources to put together a fully produced video. However, I am committed to the aim of this project which is to create a worldwide network of connected nest box cameras for everyone to watch and enjoy.

The video demonstrates a range of unique features that I have developed specifically for this project, such as AI image recognition to identify Birds, push notifications to your smartphone and the ability to watch other nest boxes on the Nest Box Live network.

Usually, when tech products are released, there is no option for them to be updated, and you are stuck with the features advertised at the point of sale. However, the development of Nest Box Live is an ongoing process and something that I’m always improving on. For example, the software running on the nest box is designed to receive updates when I release them automatically. These updates may include routine bug fixes and additional patches that bring increased functionality to the app and the community of nest boxes as a whole.

As a user, you won’t see any of this happening but you can be assured that I am continually working on this in the background. You will see changes in app updates via the Apple App Store or Google Play Store (and there have been some released already for existing nest box owners).

Nest box software updates are essential because in order to bring new functionality to the app, usually, the nest box has to do something new too. Developing these features is often a lengthy process and involves writing hundreds, and sometimes thousands, of lines of code!

What you also don’t see is the worldwide cloud infrastructure I have built to enable all of this to happen. As I have mentioned previously, this is not just a nest box camera, but rather it’s part of a bigger network and community of nest box watchers.

This project is part of a bigger vision of how I foresee us observing nature in the future, and I would love you to come on this journey with me.

I’d very much welcome suggestions in the comments section below for features or functionality you’d like to see.

On the run-up to launching the Kickstarter crowdfunding campaign, I committed to keeping you updated with the project as it develops. If you remember, in my previous post, I explained my reasons for choosing this route as it has lots of benefits for getting new tech products off the ground, like this one.

I thought it would make sense to take an in-depth look at the integration app that comes bundled with a Nest Box Live nest box. I believe this is one of the stand-out features that make this product different to anything else on the market. Having spent the past six months working on it, it is now at the stage where I can explain some of the features on how it integrates with the hardware.

First of all, I’d like to mention that many third-party apps work with existing nest box IP cameras (some of them with woeful results), but this has been developed from the ground up and to work specifically with the hardware I designed. The app is a working project, so new features are being added, and the final version may look slightly different from what it is now. 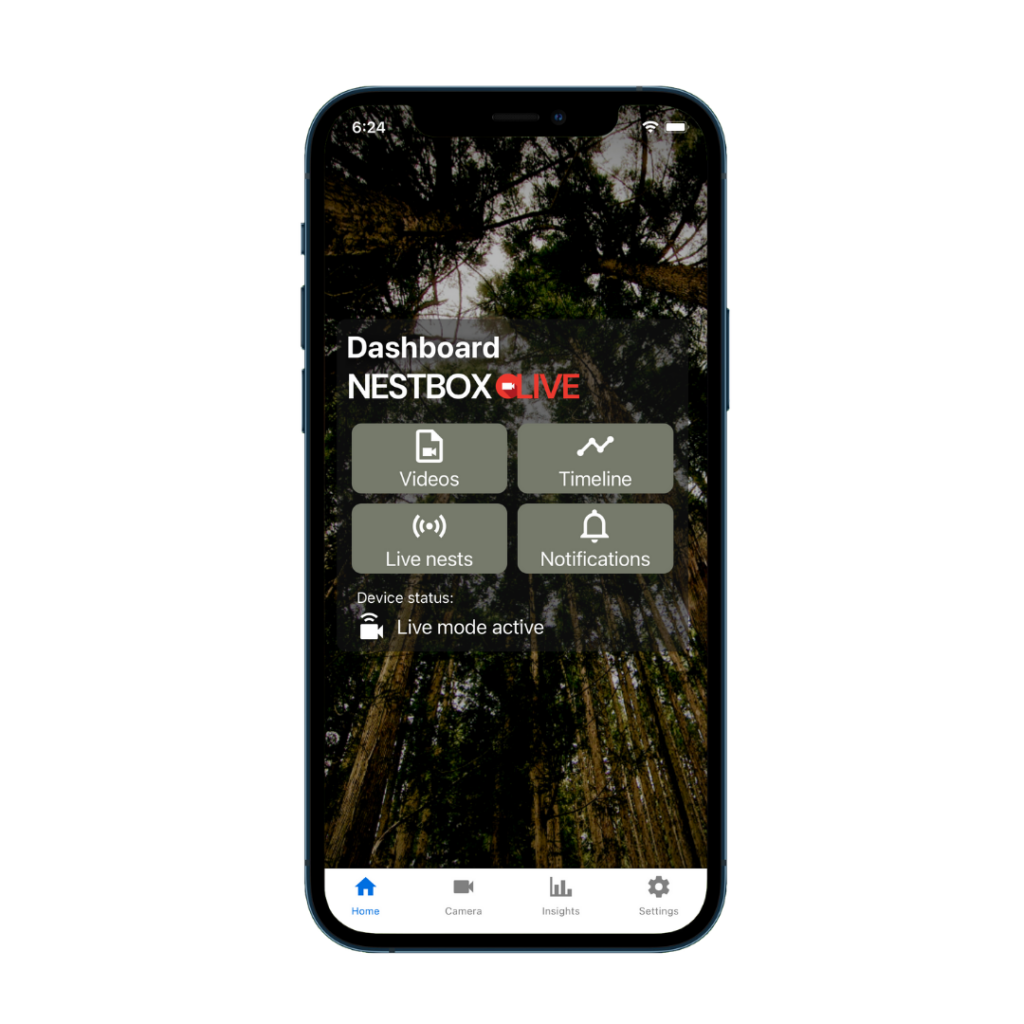 After logging in, you are presented with the Home Screen, otherwise known as the Dashboard. This is intended to be the app’s main navigation screen, and you can reach all aspects of the app from here. There are four main options in the centre: Videos, Timeline, Live Nests, and Notifications. I shall explain more of these individual screens below.

Underneath these buttons is ‘Device Status’. This explains what the nest box is currently doing. The example below shows “Live mode active”. This means the nest box camera has automatically detected birds inside and is broadcasting the video to the app. One of the other most common options to see here is ‘Detection mode’. This mode means that the camera’s AI (Artificial Intelligence) is being used to check if there are any birds inside. Once it makes a detection, it sends a notification to you, and from there, you can view a video of that visit. 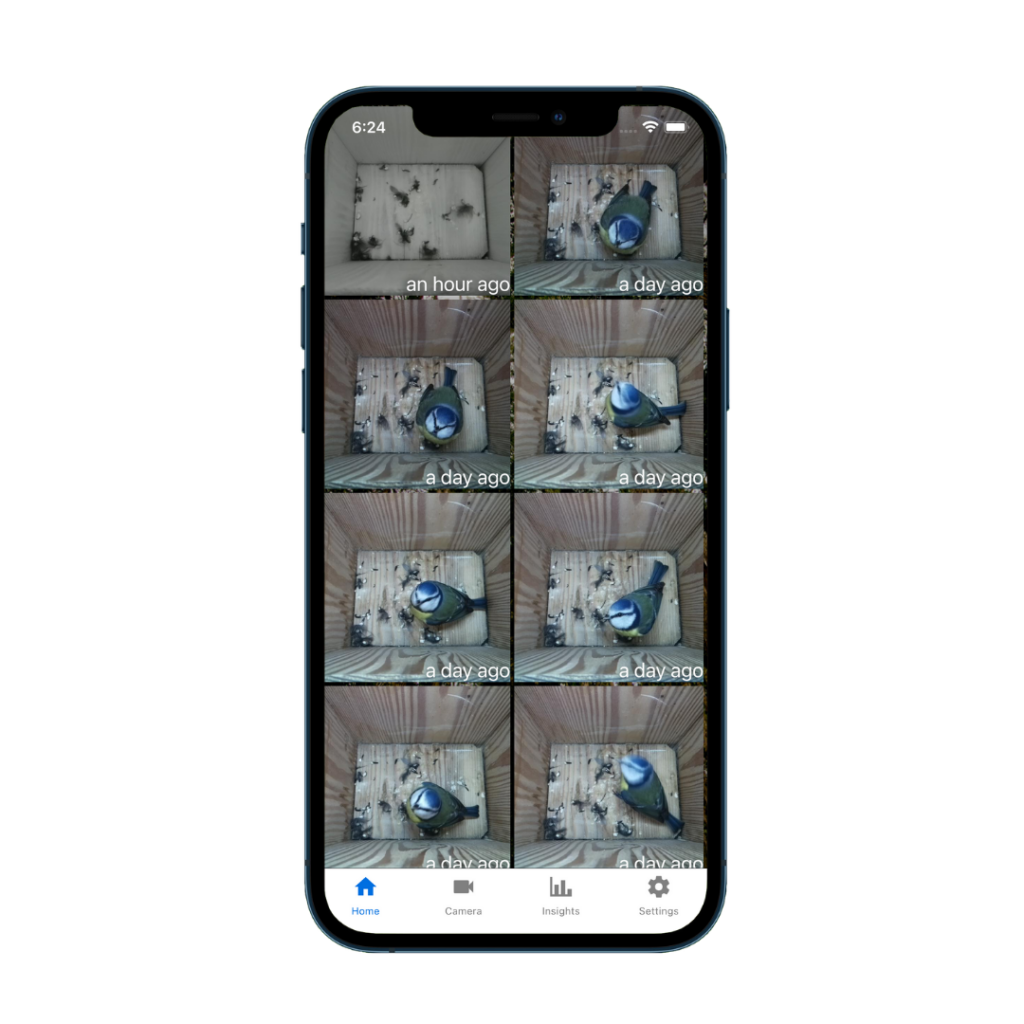 When you receive a notification that a bird has visited the box, the most likely place you will come first is to the Videos page to see what bird has visited. This page contains videos of all the visits to your nest box in ‘Detection Mode’. Each of the videos can be scrolled through, tapped on and watched. Note that when you watch the videos, you can see information gathered about that visit. Such as the current weather, the temperature inside the nest box, and the date and time of the visit. 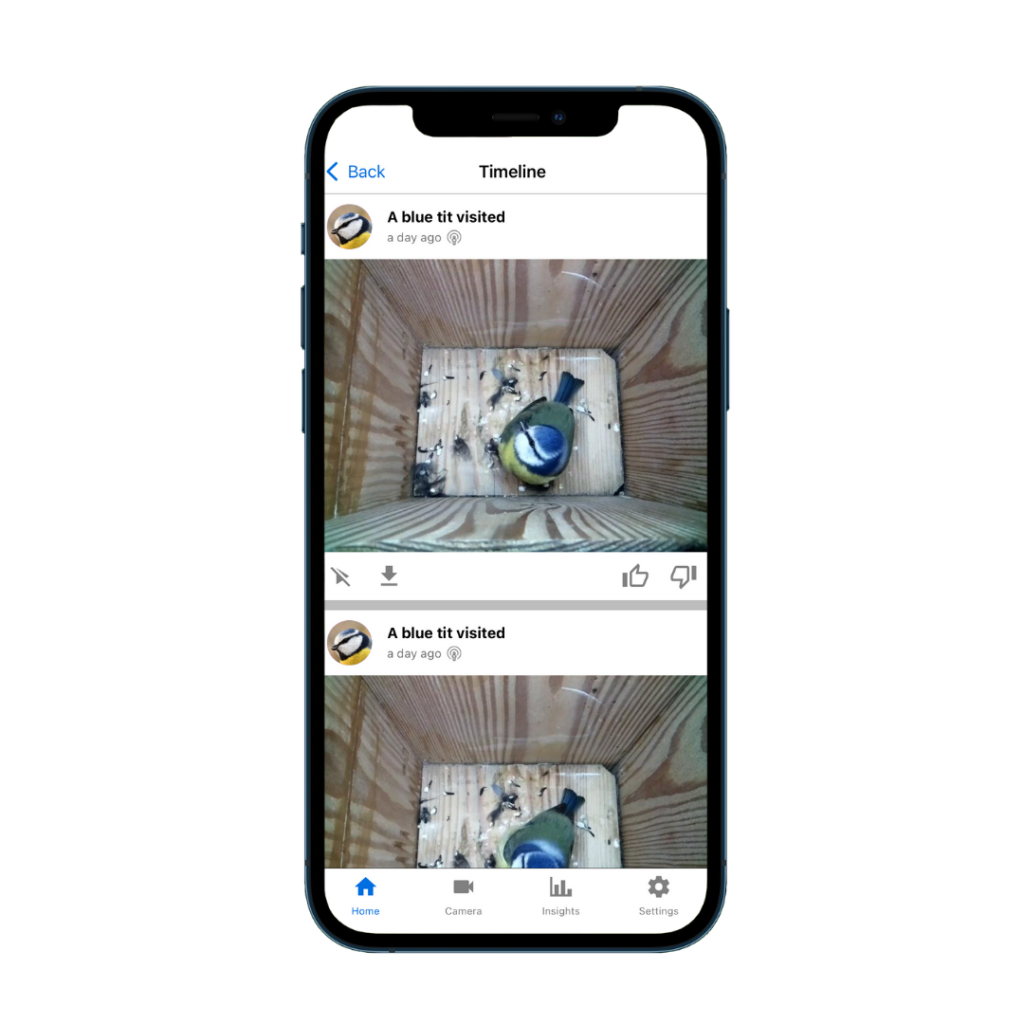 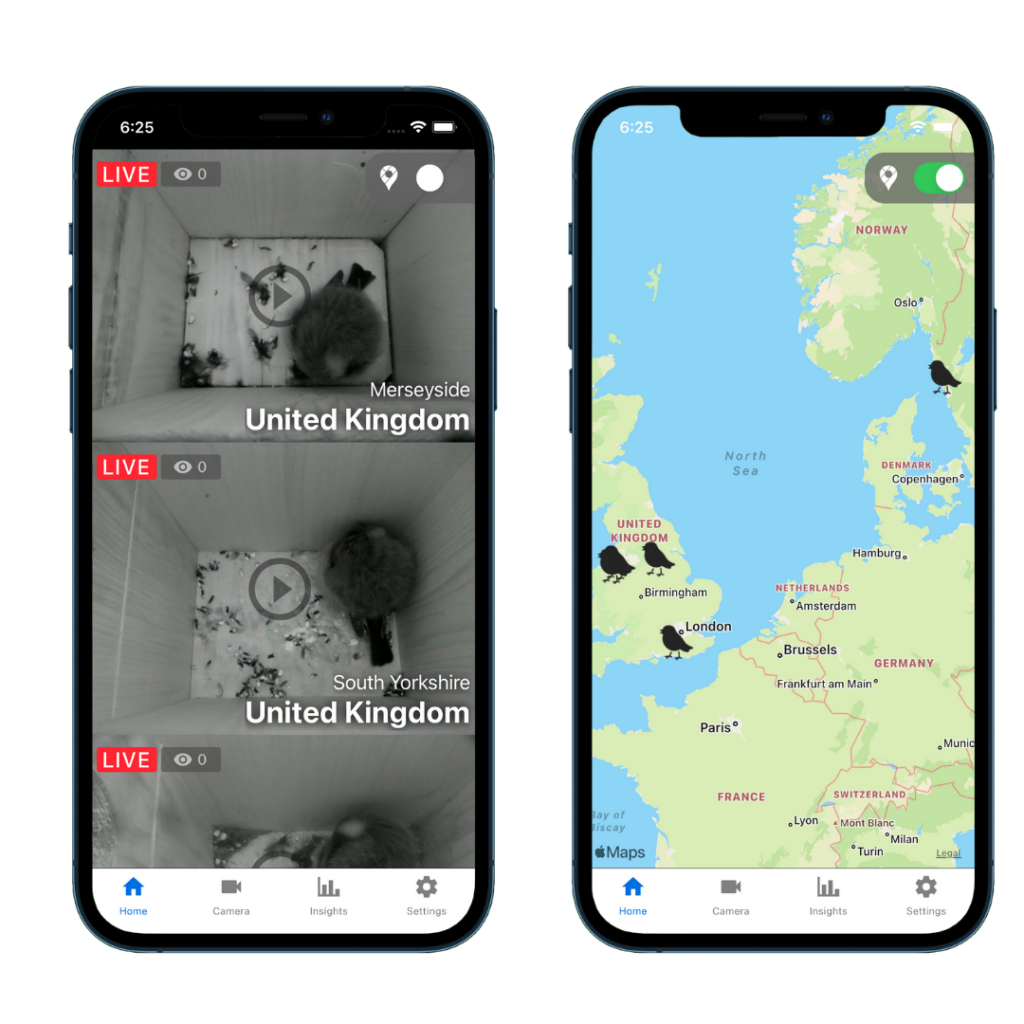 One of the most stand-out features I believe users will love is ’Live Nests’. In ‘Live Nests’, you can view any of the cameras currently streaming on the Nest Box Live network, so you don’t only get to see your own nest box camera, but others from around the world. I know this raises privacy concerns, and this feature is disabled by default. You can opt-in to share your nest box with others on the network, and in return, you can also view others who have also decided to opt-in. There is the further option to disable microphone sharing from your nest box so that conversations can’t be overheard. 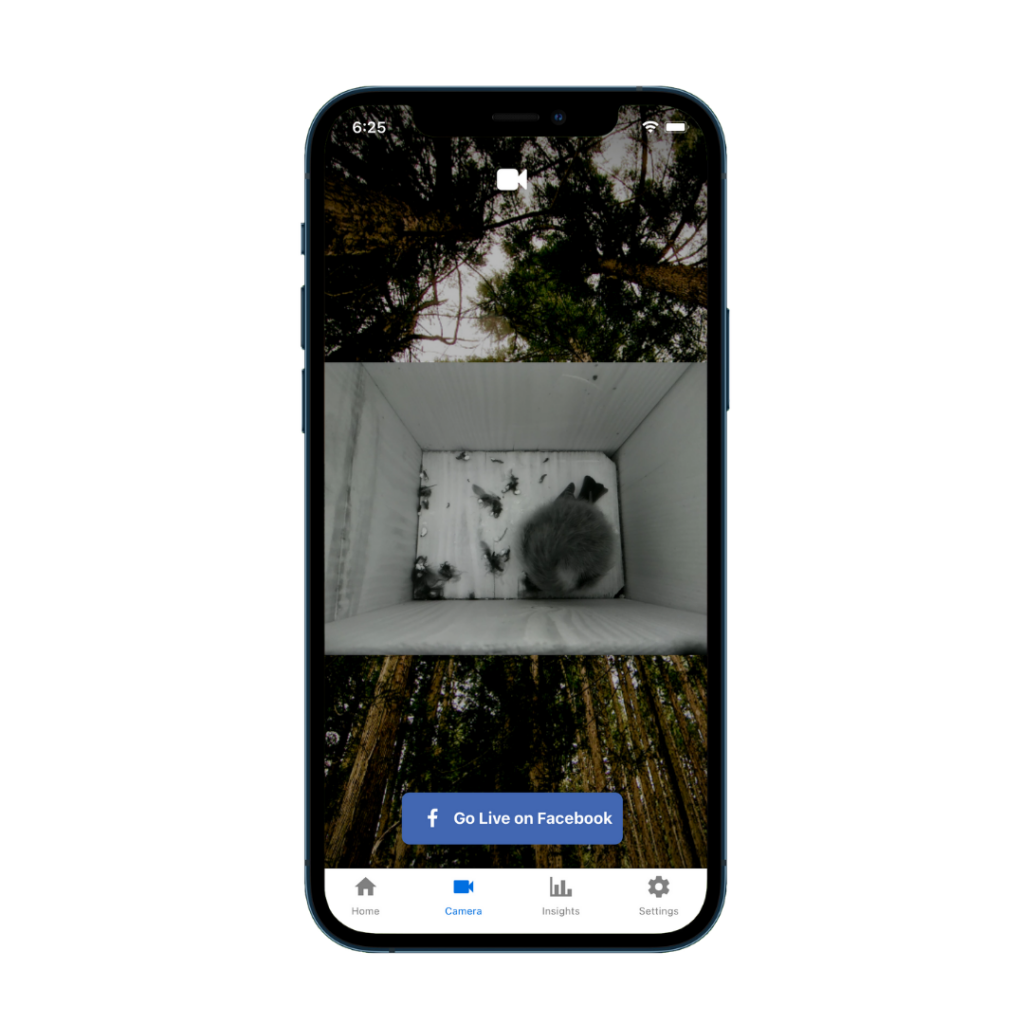 I have yet to explain how you view your nest box camera. This is very simple! On the bottom navigation tap, you can select ‘Camera’, which will take you straight to your nest boxes camera. If you have signed into the app via Facebook, you can instantly share your live camera to your Facebook profile for your friends and family to see in real-time. 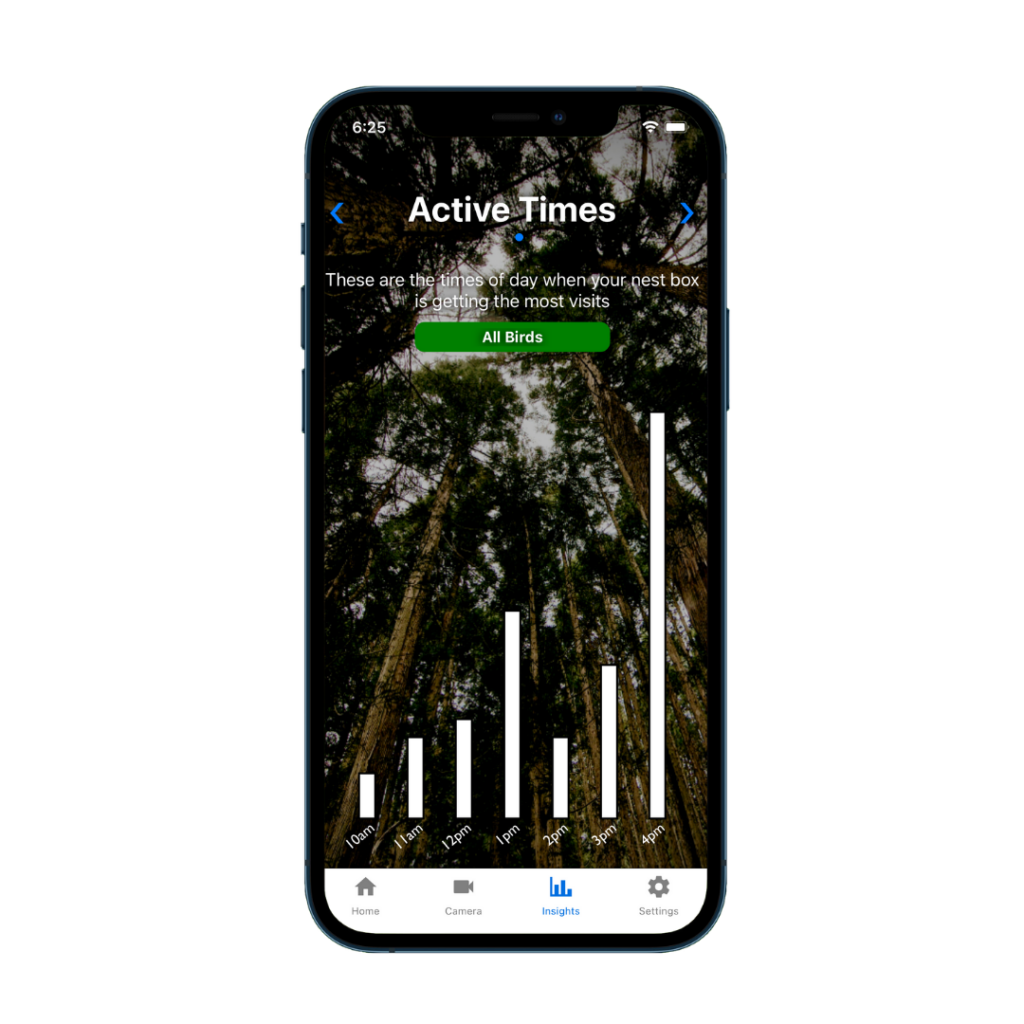 The app’s final main feature is Insights. On this screen, you can see detailed information about the birds visiting your nest box. Above, you can see a chart of times when the nest box is most active. In this example, it is most active at around 1 pm and 4 pm. This can be further broken down to times when different species are visiting.

The app will be available for download on iOS and Android after backing the project on Kickstarter and when your nest box has been delivered.